As a band, Supersonics was doing already an occasional Elvis show as a side project. Mostly during the time around his birthday (January 8) or special memorial shows around August 16. But we decided that we've been workin too hard to create a unique sound and style for Supersonics writing our own original songs. You could say that we didn't want for things to get mixed up and connect the name Supersonics to Elvis. That's the reason we baptised the Elvis shows to Sonic Kings - Supersonics Go Elvis!
And of course, any Elvis Show deserves it's own name!

Sonic Kings is not your typical Elvis Show, and least of all a "tribute" band. There are no jumpsuits flying around the stage, no fake-sideburns, no swirling Elvis dance imitations. Just great Elvis tunes, in a way you may never heard them before. And for that matter, a lot of songs you actually may have never heard being played live by a band! The setlist stretches from 1950's to a lot of swinging 1960's (Nashville Studio B and some cool movie era songs) and even a few 1970's songs. Because most of the original songs don't always have guitar solo's in them, we sculpted the songs in our own way and gave them our own sound. It's still Elvis, but with some Supersonic magic!

Here's a few examples to get an idea:

1950's:
A Fool Such As I, I Beg Of You, I Got Stung, Doncha Think It's Time, Dixieland Rock, I Need Your Love Tonight,All Shook up, One Sided Love Affair, Paralyzed, Don't Leave Me Now
1960's:
Kissin' Cousins, What A Wonderful Life, Fools Fall In Love, Viva Las Vegas, Long Legged Girl, She's Not You, Little Sister, Shoppin'  Around, I Gotta Know, A Mess Of Blues
1970's:
Promised Land, Burning Love, Let Me Be There

We are always looking for cool Elvis songs we can add to our show, so the sets will be very dynamic.
Sonic Kings Elvis shows are highlighted in color at the SHOWS page in between the regular Supersonics gigs, so you can quickly see what kind of gig it will be.

Hope to see you around on one of our Elvis Shows or Supersonics gigs! 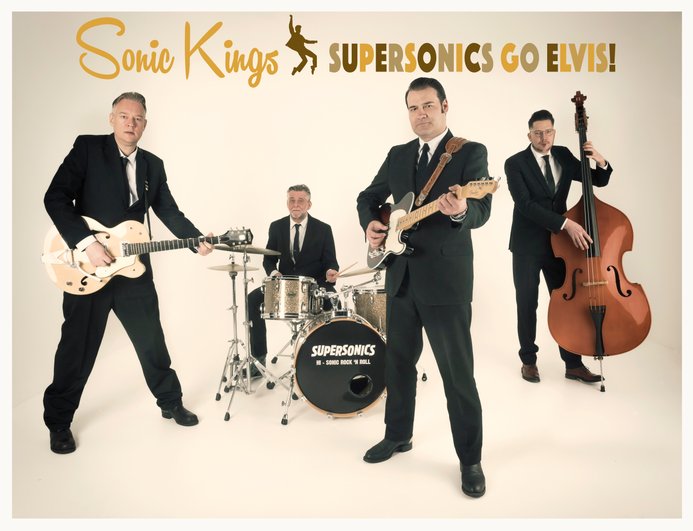